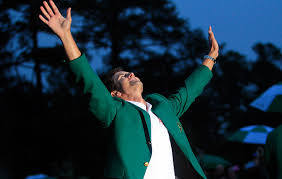 Truly a masterful performance. Champions rise above, and Adam Scott the Aussie proved his mettle in adverse conditions at Augusta National. Draining a 22 foot birdie putt on 18 kept his hopes alive as Cabrera had a tap in birdie at the same hole, forcing a sudden death playoff. Scott very easily could have lost his focus with such an unlikely iron shot by his opponent, but in the rain, he kept his poise.

Matching shot for shot, Scott dropped a 12 footer for birdie on ten to seal his destiny and a first major victory. He played like a champion, and he deserved the title at least for a few days, ‘the greatest player in the world.’ Congratulations sir.

Blending the colorful issues of life with the unapologetic truth of scripture, while adding some gracious ferocity.
View all posts by ColorStorm →
This entry was posted in Sports. Bookmark the permalink.