The addiction of texting

Ok, phones are useful. Texting is useful, but there is an increasing trend to NOT communicate. I saw a room full of people, all ages, male, female, waiting for an event to begin. 8 of  10 souls were occupied with their fingers, scanning, surfing, texting to somebody who knows where. With an opportunity to engage in genuine conversation, the folks opted to ‘friend’ their cyber kin. 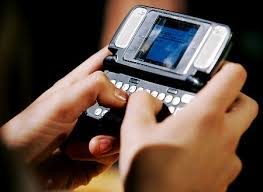 This is truly sad and it will only get worse.  Last week I noticed shoppers with heads held low, walking while texting, oblivious to who they ran over, and totally enrapt with the  phone. This so called information age, where ‘hi tech’ is the alleged mental giant, produces the exact opposite: mental midgets.

Instant communication as well as access to immediate data does not bode well for ‘chewing the cud.’  I do not see these folks as being able to carry on a true conversation, as well as the ability to ignore their phones. You have seen it a thousand times: You are talking to someone, and their phone buzzes as if they are a heart surgeon. With you now ‘in the way,’ their new conversation is now front and center. They have not a clue as to the inappropriateness of this public behaviour.

They ‘must’ at whatever cost, ANSWER the call. It is an addiction  that must be satiated, and you are the casualty. It does not matter what the content is, or who is meddling, the inanimate phone is to be obeyed. You are engaged as a human with another, and this person has not the mental acumen to ‘just say no.’ It is truly distressing.

You are talking one on one with a gal, and her phone rings. ‘Hello,’ and its off to the races, this call just demoted you to second place. Whether it is a call or a a text, the result is the same. Manners are out to lunch, you are left standing with jaw open, and the person has not a clue. Should you mention it? Sure, but it goes nowhere, as this is the new norm. Technology has made idiots of people, and the culture continues to spiral downward.

People text in church, in class, in the car, at home, work, you name it, it is round the clock. But the absolute worst and a reason to fear for this generation, is when two folks are seated at a table at a restaurant, and they are texting one another…….They have not a clue as to opening  the mouth, framing the lips, thinking, then speaking, after a pause in thought. It is foreign and hard to do.

It is easy to punch out a few lines on a keypad to ‘stay in touch,’ and I submit that here is a person who has not heard from himself in a long while. The need for instant access is the bane of youth, and this has influenced sad to say, adults. The young people may be excused slightly, for there will always be fads,but adults should be a bit slower to ride at such high speeds on the ‘information highway.

Take a careful look  the next time you are in public at the ease at which people avoid each other. It is intentional. Standing next to a person at a grocery store checkout line, there will be texting so human interaction is avoided. I rebel as much as I can as to this. Self checkout lines? No, I want a person, I do not want a machine, and I do not want to be partly responsible for a machine taking another persons job.

Will it help in the long run? No, but at least I am voicing a mild protest. Put down the phone for God’s sake, get to know  the person standing next to you, and learn to say ‘I am busy’ when the phone ringer goes off, for guaranteed, that next text is not important enough to eat your words when talking to somebody

Texting IS an addiction, when it displaces human interaction, and creates a poor diet. Even a cow ruminates what it has eaten, brought up at a later date to digest. We do not do that, and we choke on an overload of data, knowledge, and communication.

Does anything else suffer? Oh yeah, how about handwriting, letter writing and just plain ole listening.  The younger crowd struggles to get through the alphabet, is lost giving out change if the ‘text’ of the cash register is broken, and has the attention span of a gnat. Machinery and tools have molded us into instant programs, where we microwave our relationships like drive through handshakes.

Speed, I need to know ‘now,’ is causing us to suffocate in our daily relationships, and the phone, i-pod, computer, is making us poor thinkers. When was the last time you read a long book, and you were able to get through it without interruptions, and deferring to the interruptions?

Try a new diet of consideration and true human communication. Next time you get a text, avoid it. That’s a start.

Blending the colorful issues of life with the unapologetic truth of scripture, while adding some gracious ferocity.
View all posts by ColorStorm →
This entry was posted in Homespun and tagged Communication, Facebook, God, Human, Telephone, Text messaging. Bookmark the permalink.