The signature of Obama 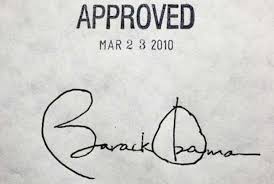 Our signature is the mark of a solitary and unique personality. The setting of ‘ink to paper’ distinguishes a person from all others, in a way that is similar to a fingerprint. Whether we write slowly or with speed, much is revealed with a single stroke of the pen.

Mr. Obama has one of the strangest signatures I have ever seen; the height of lettering in proportion to space, the enclosure of ‘letters within letters,’ the stoutness of lines, the ending flourishes; the separation of characters; there is a revelation in our hands when the mind puts letters on paper, which should give pause to a thinking person.

Nothing can be hidden from a signing  for it is instant, there is ‘no thinking’ when we write our names. Obama ‘owns’ his endorsement, and primarily, I would suggest that here is a man who wants to be noticed, one who desires to stand apart, one who has no competitor nor equal, and one who at all costs, MUST have the final word.

The starting of his ‘B’ is beneath all else that flows. It appears his name rests on a pedestal above all else. ‘Thou hast magnified thy word ABOVE thy name,’ which is true of God alone, but we see a subtle hint of this huge ego and self-given pomp. The disconnect of the lines within the ‘B’ show a detachment, an aloofness, a careless dismissal of everything that follows, and many clues are now seen that we have a president that is certainly ‘apart’ from all others. ‘I will do this without Congress. I will not negotiate.’

The next five letters are small ending with a ‘k’ that is vertical. There is a consistency which is good in lettering, and certain things are consistent with our president; he is predictable. He is known to shift when it suits him, he is known to say ‘didn’t know’ when the heat builds, and he most assuredly avows his famous ‘let me be clear,’ when he is berating the opposition.

But the oddest ever of a last name shows an arrogance unlike all others. The ‘O’ strung around the ‘b’ and ‘a’ is a combo that cries for attention. Who writes with a circle around letters? Again, notice the consistency of ‘arack’ and ‘bama’ within the framing of the signature. It resembles an inverted peace symbol, but the small ‘b’ is straight, rigid like, but extends outside the ‘O,’ a not so subtle indication of power outside the range of what is common. That small uprise of the ‘b’ outside the ‘O’ is an over exaggeration of self, and paints an ego larger than life.

The ‘O’ is pear-like, not circular at all, with no attempt to do what is natural or normal; I believe this writing is now natural,  but I would be curious to know if this was the same writing of his youth.  The ending letter, the ‘a,’ note how it trails into obscurity with no completeness, no finality, and how formal, straight, and cold.

There is an iciness in this signature, a strangeness, an arrogance, a lack of accountability, with power dripping at every curve of every letter. Who writes like this, with a circle around their own letters?

The capital ‘O’ of Obama, surrounding the following letters, reveals the perpetuity of desire, with an extreme mechanism to be noticed, and a lack of accountability to no one; this is one strange signature.

Blending the colorful issues of life with the unapologetic truth of scripture, while adding some gracious ferocity.
View all posts by ColorStorm →
This entry was posted in Pres. Obama and tagged handwriting of Obama, the signature of the president. Bookmark the permalink.

10 Responses to The signature of Obama