Julie accidentally dropped the remote control and it shattered into pieces; useless. When the water pump in the car decided to quit working, the car broke down, was useless until repaired,  and when the clerk dropped the light bulb, she watched it shatter into uselessness. How many bats did Babe Ruth break? Useless. 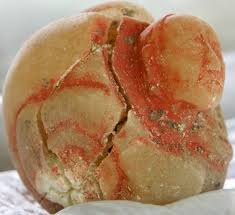 Things break all the time, and thankfully, there are easy remedies to get back on track.  A new remote, water pump, light bulb, or the baseball bat can easily be replaced.  Regarding things, broken is simply ‘having been fractured or damaged and no longer in one piece, or in working order.’

While in their broken state, the remote was useless, as was the water pump, the bulb, and the bat. There is however another ‘broken’ that is quite valuable and rather useful.

Allow me to set the table.  There were behind the scenes devilish strategies to deliver up the Lord as people were plotting for His death. This solitary man, this teacher and lover of mankind who always did things well, was invited to the home of one Simon, who by the way was a leper. Yes, a man who had but a few visitors ever,  was graced by the Son of God.

In the context of a soon departure from life, a woman takes an alabaster box of ointment, very costly, (some say a years wage) and she broke the flask, and poured the ointment on the Lord’s head.  The nard had intrinsic value, even while unused,  but it took on a new identity when it was first broken, and secondly, used solely for the Lord.

A plot to kill a good man. A dinner in the home of a leper. A woman breaks a vial. People complain about the ‘waste.’ The odor fills the house. The leper is dignified. The Lord frets not about his own demise. He comforts the woman. He chastises the complainers. He loves them all.

She BROKE the vial, and it became more valuable, useless in her mind for the Lord unless broken. She knew something so rich that the Lord embraced her gift. ‘Let her alone, she did this for my burial,’ and it no doubt fell on deaf ears, but that’s ok, some things were meant to be heard by others.

I too am useless unless broken, for the sacrifices of God are a broken spirit, a broken and a contrite heart O God thou wilt not despise.  Broken: completely subdued and crushed. Not all things are useless while broken; are we not more valuable than remotes and bats?

Remember the solitary colt that the Lord asked for? It was wild, never broken, and it immediately became tame at the presence of the Master. Broken, now useful.  When David had an indiscretion with Bathsheba, he too was crushed, and penned the remarkable Psalm 51, of which I am thankful, for we see a God who honors the lowly of heart.

He will not despise a broken spirit, he will not ignore the contrite, and he without reservation gives grace to the humble.  This is why He was so comfortable in the house of Simon the leper, after all was he not friend of sinners.

The odor of the perfume wafting through the house of Simon the leper……can you see this? but it only became relevant,  AFTER the vial was broken for the Lord’s person, by a very, very good woman, as she testified of a broken spirit.

This scene was one of the most endearing in the New Testament.

Blending the colorful issues of life with the unapologetic truth of scripture, while adding some gracious ferocity.
View all posts by ColorStorm →
This entry was posted in The person of Christ and tagged alaster box of ointment, broken spirit, ps.51, simon the leper. Bookmark the permalink.

4 Responses to Useless and broken