A document uncovered inside of the British Library in London, England, is said to hold monumental secrets about Jesus’ life, including the claim that he was married to Mary Magdalene and that they had two children together.

The manuscript, which was translated by York University professor Barrie Wilson and writer Simcha Jacobovic, is said to be 1,500 years old and to have been written in Aramaic, according to the Independent.

Wilson and Jacobovic have penned a new book outlining these purported secrets called “The Lost Gospel,” which promises to take readers “on an unparalleled historical adventure through a paradigm shifting manuscript.”

The authors claim that this so-called “lost gospel” gives credence to past theories that Jesus was married and that he had a family during his earthly ministry — tidbits of information that are found nowhere in historical or New Testament scripture.

“There is now written evidence that Jesus was married to Mary the Magdalene and that they had children together. … Gathering dust in the British Library is a document that takes us into the missing years of Jesus’s life,” the book reads in part. “According to the document that we uncovered, sometime during this period he became engaged, got married, had sexual relations, and produced children.”

All of a sudden, people will jump on board to support a view that is contrary to scripture, while never looking into the original book itself to see where this idea could possibly come from. The bible will be popular once more as used to promote its demise!

Some say of course he was married, after all, He was the groom at the wedding of Cana of Galilee. Hmmm.  Same say no big deal, married or not, He still is Saviour. Again I say Hmmmm. Does it matter, and is it a big deal?

Marriage is good and honorable who can deny, but the Lord being married would pretty much make himself a liar and therefore an unfit Saviour. Ah, yes, how clever. Isn’t this the plan all along, to make the word of God of no effect?

Thank God we have the scriptures to combat one more attack on the word of God and the person, work, and worth of Christ.

Remember that eventful day when the devil took the Lord to a high mountain and challenged His Lordship by quoting scripture? Took some courage to mouth half-truths as he tried to isolate scripture against scripture. 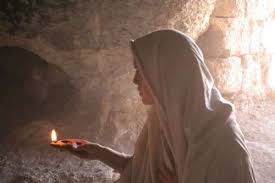 He is an adversary, and he has become quite crafty at manipulating scripture to suit his end.  Here once more, we see his tentacles reaching back in the library of time, and utilizing manuscripts to cast aspersion on the written word and the living word.

‘For the time will come when they will not endure sound doctrine.’

‘These are enemies of the cross of Christ.’

‘Having their conscience seared with a hot iron.’

‘Who is able to bring Christ down from above?’

‘Foaming out their own shame.’

He was the word made flesh, for  TIME. To suggest that the Lord while sinless, had children with a daughter of Eve, would be according to His own definition of marriage: ‘The two shall become one,’ and ‘one flesh.’ and as such, would fall under the umbrella of Adam’s sin, and therefore make Him a sinner. Perish the thought.

Did not the Lord say of himself ‘I and my Father are one?’

Would their children be then, ahem, children of God in the literal sense? This idea gets worse and worse the more you consider it. A seemingly innocuous suggestion becomes the headline news of the day.

Scripture is silent as to this idea of the Lord being married to the Magdalene, and men do not have the liberty to suggest such a thing. There is this thing called ‘adding to the word of God,’ with obvious warnings and dire consequences.

I apologize for this flippancy here, but you have the matter of the paperwork and the courthouse…and all the disastrous ramifications.

Certainly the Lord had a fondness for women unlike any man, but geez, He was/is the Lord of glory, He whose name is Wonderful.

Blending the colorful issues of life with the unapologetic truth of scripture, while adding some gracious ferocity.
View all posts by ColorStorm →
This entry was posted in Unbelief (ahem: atheism) and tagged Abraham, Barrie wilson, false gospel, itching ears, Jesus was married to mary magdalene, jesus was married?, simcha jacobovic. Bookmark the permalink.

6 Responses to Itching ears are here again (Jesus was married)