The moon of promise

I have always appreciated the moon, that magical night-light in the heavens that is the inspiration for so many things. Moon over Miami, Pink Floyd’s Dark side of the moon, Dracula’s moon, Cher’s Moonstruck, Sarah Brightman’s La Luna, Frank Zappa’s Moon Unit, Jimmy Stewart telling Mary he would promise her the moon; the list is a mile long. 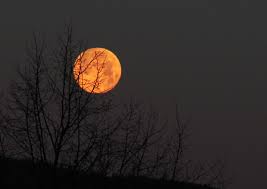 There is however a truth surrounding the moon that we let slip, which speaks of a Creator and his enduring promise. He who keeps in suspension the sun, the planets, the stars, and the endless galaxies, (with no effort by the way) has gone on record telling whosoever is interested, that He will ‘never forget’ the nation of Israel.

Yes, His perpetual promise, similar to His oath with the rainbow, that He would keep, protect, and preserve a particular nation.  Am I sure, and how can we know?

which giveth the sun for a light by day, and the ordinances of the moon and of the stars for a light by night,  which divideth the sea when the waves thereof roar;

The Lord of hosts is his name:

If those ordinances depart from before me, saith the Lord, then  the seed of Israel also shall cease from being a nation before me for ever.

If heaven above can be measured, and the foundations of the earth searched out beneath,

I will also cast off all the seed of Israel for all that they have done,   saith the Lord.

Who can deny the relentless attacks on that tiny piece of real estate, which has been headline news for thousands of years?  Am I boasting about a group who is somehow morally, physically, and spiritually superior to all others? Perish the thought, but I am taking note of God’s eternal promise that HE will preserve a nation, and he tells mankind, that His word is as reliable as the moon.

Can man claim title to the heavenly orbs?  Did man  give daylight? Did man sprinkle the stars for night lights? Which law of science created the waves and ordered their boundaries? What tool can man use to measure the heavens? What earth-mover can measure the corridors below?

God keeps His word. The moon above, and the nation of Israel are further proofs of his promise.  Note he will keep the seed of Israel ‘for all they have done.’  Indeed, part of that past is sordid, but let God be true.  How bad was it?

‘Jerusalem, where our Lord also was crucified.’  Enough said.

That’s how good God is.  To the believer, God be thanked. To the skeptic and all others,  consider that God who keeps Israel, neither slumbers nor sleeps, and can meet your deepest need also.

(And just for the record, Jeremiah was instructed to write this, well north of 2.000 years ago. God’s word is pure, sure,  and settled)

Blending the colorful issues of life with the unapologetic truth of scripture, while adding some gracious ferocity.
View all posts by ColorStorm →
This entry was posted in Israel and scripture and tagged God, Israel, jeremiah 31, Jews, the moon and God's promise. Bookmark the permalink.

4 Responses to The moon of promise