You have seen them and no doubt been to a few: ‘Fairs in the park,’ where vendors and artisans present their wares, mostly one of a kind pottery, paintings, wood carvings, tapestries, and all kinds of interesting stuff. 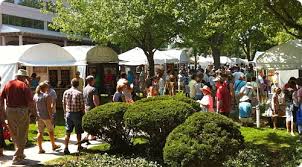 I had on  display  a side table, nothing really unusual, except for the painted top. I rendered it in shades of green to replicate a slab of marble. The prep time took months as there was sanding, priming, layering, more sanding, application of color, more sanding, layering of glazes, more sanding with each one being more and more finer.

After the color, shadowing, and veining was just right, there was the varnishing, with again each coat becoming finer and finer, lastly a wet sanding of 2000g, until at last it resembled glass and fine green marble. It turned out pretty nice.

After several people appreciated the table and asked about the technique, a fellow examined the darn thing for half an hour until he finally decided the piece was a fraud. He said it was not painted. Imagine my elation!   ‘You didn’t make that!’

But he continued and was adamant that I was falsely representing the table.  I must have been given an extra dose of patience that day, for I spoke with him in the most gracious way possible. But he walked away being an unbeliever. Hmmm.

Here he was, within arms reach of the ‘creator,’ I being 100 per cent truthful, showing him the evidence, and ‘How’ I finished such a work, and he refused to give the builder credit for his own work. Really, he gave me the highest of compliments; it was not my intention to deceive anybody, but that’s how HE took it. What more could I have said to him before he believed. Did he not accuse me of being a liar?

Yet men refuse to see that they perhaps may be the same liar having even more evidence than a painted table.

His ‘explanation’ as to why my table was not painted was legendary. No maligning here of engineers, but too often, our minds over-rule common sense.

Is not this the heart of  man? To stand within 6 inches of understanding, having all the proof one could need, testimony, even speaking directly with the creator, and still refusing to believe?  Seeing all that is, and still saying adamantly ‘No!’  But really, I did feel sorry for such a person, so unable to take somebody at their own word.

If men cannot believe something having seen……………I may venture a guess that the fellow who doubted my table could not possibly have room in his enlightened mind for  a God who could create all that is.

It’s pretty easy to see a Creator, just look around, and use your head.  Evidence abounds.

16 Responses to Hey that’s a fake!