First the soft piano music. Add very clever images of tradition, family, children,  a holiday, ‘feelings,’ and the quintessential image of a Rockwell painting, all used to not only support, but to promote same-sex marriage, and you have a Hallmark moment.  Ouch. 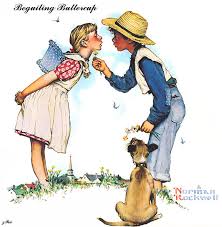 Yes, a drug commercial for the ages, television magic. The granddaughter of an American icon is using her family name to jump on board to instill into the fabric of America, that ‘the times, they are a changin.’  Tylenol doesn’t have an agenda, nooooo, this is simply business. Sure.

Norman Rockwell ‘painted America’s story for  60  plus years,’ yet I do not recall seeing one painting, not one suggestion, nor one clue that he could possibly envision a girl with 2 moms, as somehow being ‘normal’ as apple pie and Chevrolet.

Ms. Rockwell said:  ‘the definition of family is expanding and blossoMING,’  (up shift), ‘ so it’s not this rigid… fixed picture.’   Yea, a man and a woman in this institution known as marriage is ‘rigid.’

Sooo, the definition of family is expanding and blossoming.  ‘Family is what you make it out to be,’  says the commercial. The innuendo is rather subtle, for there is a lot of truth to families having issues while still remaining a family. Who could argue?

But the ‘definition?’ Ah no, a tiger does not remove his stripes because the hyena is offended. Some things are lasting and true, and while yes, Sally may have two mommies, there is no need to amend the very word ‘marriage,’ which simply implies a union of opposites.  Wouldn’t the Tango be absurd if danced by two females?

For those of you who will immediately crucify me, take a deep breath. If you disagree, and think I am unfair or behind the times, leave your emotions off the table, and weigh this campaign against the entirety of Mr. Rockwells’s life’s work.

Try to judge with impartiality, and note that this ‘push’ for normalizing same sex relations has merely defamed the name of a good man, by trading on his reputation, and using his time tested values of American life to advance an agenda, which I think, he would despise.

And yes, the drug company has every right to make their commercials, but I’m guessing they may suffer for it. But hey, maybe I’m wrong.