The rise of the meebot

There is no place to hide as they are everywhere. In the grocery aisles with Mom, at the mall, at the boardroom on Madison Ave, sports, I’m tellin ya, they are multiplying.

We all know folks like this. They were groomed in the home, practiced the art in kindergarten, fine tuned it in high school, and perfected it in the workplace.  All along, there has also been the aiding and abetting of adults at every turn, who shaped this strange creature from the craft of meebottery. 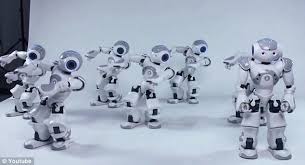 Two adults are talking privately, and the meebot comes around the corner instantly inserting himself into the conversation of HIS choosing, and both parties defer to the shiny and loud ‘guest.’ Yes, he must be seen and heard, now. Me. Me.

HIS  arrogance is important, and all fall prey to his schemes.  In the presence of a meebot, none dare say: ‘Do you mind, we are having a conversation.’  The meebot is kind of like a fly at a picnic. He is annoying and everywhere, but harmless. Well kinda sorta.

Two men in a showroom were looking at a motorcycle, discussing baffles and lights, and the meebot pops out of nowhere, telling both men about his baffles and why they should or should not go with a certain ‘air flow system.’

After going on for ten minutes he disappears, and the ‘engineer’ who designed the baffle continues his talk with the vendor. Yeah, kind of embarrassing, but the maker of the system said not a word, but he should have. Me. Me.

It is times like these when the ‘bot’ could have been handed a valuable lesson, and the indifference by they who should have simply said ‘do you mind?’ simply fuels the impropriety, and makes it stronger.

Meebots have never been stood up, hence their rapid ascent to ‘fame.’  I can spot one, yea rather, I can hear one a mile away. Upon visiting the factory Mr and Mrs Botts 7 year old daughter proceeds to the front desk, and usurps herself into a business transaction, and within seconds, she is literally sitting on the lap of luxury. By virtue of her association with Mr. and Mrs. Meebot, she as the baby bot, has all rights to derail a meeting.

You walk away rolling your eyes and scratching your head. Where did this strange-ness come from? Short answer: Meebottery begins when discipline is non-existent or ceases. There is no respect for authority. No absolutes. It’s all the about the great M.E.

I went to work with my Dad when I was 9 or so, and he dropped me off at a guard-house of a facility because no children were allowed inside. He said, ‘I’ll be back for you, stay put.’ Naturally, the 15 minutes seemed like 3 days, I was beside myself, thinking he was lost or forgot me, but the world continued to spin just as it was upon his return.

I learned about authority, patience, discipline, trust, fear, promise, while adults today see these things as weaknesses.  God forbid a man would have to wait 45 seconds until another fellow finishes his conversation before he ‘jumps in.’  Why should an adult teach little Ainsley to say ‘excuse me,’ before putting herself between the conversation of two adults?

Isn’t it proper to ‘give place’ to a 3, 4, or 5-year-old? In a world without authority or manners, than yes, i suppose so, but in a world where there are rules of decency and common sense, then no, the girl can patiently wait. Does it always have to be about ME ME ME?

Some will say, ‘what about the children that the Lord said not to offend?’ I would say: ‘What about them?’ and this point is hardly worth addressing in the context of meebottery.

Enter a spiritual component and you now have a nightmare. A man who dissected a frog will lecture a brain surgeon on how best to remove a tumor, and a man who despises the word of God will chastise Dr. Billy Graham for preaching the gospel incorrectly.  Truly distressing.

Oh yeah, and by the way, some of the greatest men of God were once Meebots. As a matter of fact, they all were     😉

Blending the colorful issues of life with the unapologetic truth of scripture, while adding some gracious ferocity.
View all posts by ColorStorm →
Gallery | This entry was posted in Homespun and tagged little people machine, meebottery, pride and machines, rise of the Mebot, scripture and pride, sociology and pride. Bookmark the permalink.

33 Responses to The rise of the meebot