I’ve mentioned it before that there is hardly a sight that can be compared to the grandeur and genuiusness of the rainbow spanning the earth. 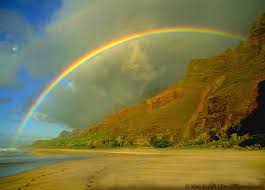 Try to recall the first time you witnessed such a sight, and the instant ‘wow factor’ that captured your attention. I’m guessing there was an immediate smile and ‘can’t look away,’ while at the same time caring less for the laboratory results as to How the thing stays together in such an unbelieveable and perfect arc.

Didja catch that word unbelievable? Not the overindulged usage of an ‘unbelievable’ basketball shot, or an ‘unbelievable’ manuever by a motocross rider, no, something so spectacular as water running uphill, that the rainbow can correctly be viewed and appreciated as ‘unbelievable’ truly, and one that stands alone.

In speaking of color, some look at a rainbow and say ‘ho- hum,’ as if magnificence can ever be boring or common. And folks say there is no proof of God……what the heck do ya want, a personal letter with your name that says: ‘open your darn eyes for goodness sakes?’

The rainbow. The arc of universal excellence and glory of nature, that completely leaves out man as the designer or the one who could take credit for such awe. To see the orb of a rainbow and have thoughts that are not toward a creator is truly ‘unbelievable.’

A  man snaps a photo and the image resides hidden; latent beauty to be revealed, known to exist of course by faith, but we do not give God the same courtesy. The rainbow is not a freak accident, but a perfectly designed display by He who lends the rain, that men may see and have no excuse; that every mouth may be stopped in reverential consideration of One high above in every deserving way.

‘I do set my bow in the clouds.’ Such marvellous simplicity that quiets the accusations of the sceptics.

It is HIS bow. Can we not allow God to smile without stealing his honor?

Must we prevent Him from attending to His earth? Must we always make Him sit in the ‘back,’ unseen, unwelcome, and one to be considered as homeless or in rags? Mankind has a habit of despising that which is excellent…

The rainbow. Unassuming majesty on display that whispers ‘draw nigh.’ God does not force Himself on the mind and heart.  He is. The rainbow is HIS. Man did not build that! Man takes no credit for something so eternally fantastic. It is not in the heart of man to guarantee the perpetuity of the earth and its seasons by a bow in the sky.

Man cannot dream what only God can promise. God finished his creatorial work, and said it was very good, and I dare say there is not a person alive that would not agree that the sight of a rainbow is  ‘very good.’ Who could find fault with a rainbow? Who can see such a halo and not think of eternity?  That’s right, none. Some may not believe, but one cannot avoid ‘thinking’ about He who is.

Yea yea, there may be a few that see the bow only through black clouds of doubt or science, but so what. God did not present His bow for the purpose of satisfying meteorologists. HIS bow is a reminder of HIS oath, while at the same time speaking of His grace in a world gone sideways.

Of course some would argue, but have ya read the news lately? Men want to be women, women want to change race, a kid can’t sell five cent lemonade to men working in sweltering heat without federal regulations; universal decadence, dictators plotting further usurpations, professional political liars looking for promotions, banks plotting for monopolies; utility, oil, and communication companies planning their next hikes; murderers, thieves and rapists lining the jails, and the plain old heart of man practicing corruption and every vile imagination of the heart.

Need more proof? There are always blogs that tighten the noose of man’s arrogance…. Hence the importance of the rainbow. In a world away from God, there is stability in knowing He is surprised by nothing. The vain schemes and the perpetual daily insolence does not catch Him off guard, and He still ‘sets His bow in the clouds.’

He is faultless, blameless, and perfect in every way. When someone TRIES to put God on trial, as humorous as that is, it is always, it is always from a place of unbelieving pride, which presents man as being wiser than the creator. Sounds familiar, as they worshiped and served the creature………….

And where one sees nothing but vapor, ho- humness, and accidental or purposeless molecules forming color while suspended, another sees round about the throne and the water of life.

The rainbow! All hail to the maestro of life.

Blending the colorful issues of life with the unapologetic truth of scripture, while adding some gracious ferocity.
View all posts by ColorStorm →
This entry was posted in Genesis- in the beginning and tagged faith, Nature, rsinbow, science and God's rainbow, the rainbow. Bookmark the permalink.

19 Responses to Just another rainbow