Posted on December 7, 2015 by ColorStorm

Please consider the deeper truth of what sits on the surface. 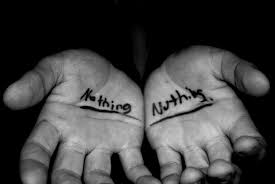 What do believers have in common? Everything. Every thing

What do unbelievers (more exact: the atheist branch) have in common? Nothing. No thing.

A man should be rather slow to argue over nothing. Moreover should he be a bit slower to defend nothing, and slower even yet to promote nothing.

To argue, defend, and promote a Godless creation, is to vote for a big fat nothing. No designing, no planning, no directing, no organizing, and no controlling.  Pure nothing. I sense a pattern. The universe and all that consists, designed itself with nothing in mind, and is left to itself to manage with nothing in mind. Uh huh, sure.

The word for the day: nothing. No master intellect in the design. None in the organization. And none in the sustenance in 2015.  No thank you. I have nothing in common with such nonsense.

And now my five fav words in English:

He made the stars also………put that ‘nothing’ in your pipe and smoke it.

But hey, if you have nothing in common and are quite happy, go for it. When you tire though of the merry go round that makes you dizzy, God and his word will be waiting, unchangeable and inviting.

‘By Him all things consist.’

‘Without Him was not any thing made that was made.’

So a fair concern to consider, is whether to spend time and energy in the only lifetime we have on nothing. To erase God from His creation, is really to be an evangelist for nothing. I don’t know about you, but I would be a little cautious about defending and promoting nothing.

This is ColorStorm, and I approve of this message.

Blending the colorful issues of life with the unapologetic truth of scripture, while adding some gracious ferocity.
View all posts by ColorStorm →
This entry was posted in Genesis- in the beginning and tagged creation and God, creation and nothing, science and scripture, who made the stars?. Bookmark the permalink.

3 Responses to It’s nothing really