Sooooo, the common spider who spins a web to snag his daily bread, how long did it take him to read the instructions for constructing such a masterpiece? 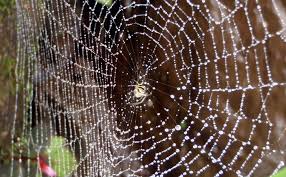 Surely the little fella would starve to death before he could figure out how to utilize a design so intricate as a web, which brings into play angles, weight, orientation, time of day, cover, and just about all around ingenuity.

Hmm, quite the dilemma for some. Was the wiring to build innate before his birth? Did he learn it while in the womb of his mother? Was it taught to him by his father out in the shop? Did he copy the design from a neighboring spider, and say, ‘I can do that?’ Strange then eh, how a spider ten thousand miles apart, while not able to communicate with his kin, and while never meeting, would build an identical web.

The spider’s web destroys the idea of life apart from the Creator. The web is an act of intelligence, and all across the world, the marvel of the spun web speaks to the Creator and His provisions for all creatures, great and small. 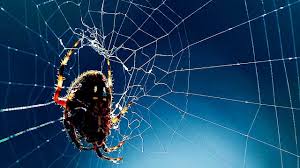 The spider and the king’s palace! Ha, no stopping these formidable guys. It has been said that any where on earth, a spider is no more than 25 ft from you.  Yep, the reasons abound for the Creators thumbprint. But that darn web. The structure of the universe can be seen in that webbed wonder of the world, and notably, the Giza pyramids don’t have as much glory. 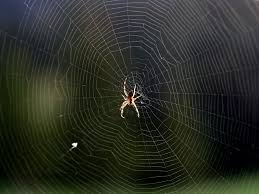 Pity is a word which comes to mind when I think of a person who will not allow the intelligence of a God above all in a world which screams ‘Creator.’  It would be rather convenient for the night bat to make a web, to save all that energy flying about……..seeking bugs that can easily be snagged in a web, but nope, he can’t do it. Wait, he has sonar! yep, he dreamed that up on his own too, before he learned to fly, before he knew what flying was…Yeah uh huh, sure. Pity is a word which comes to mind.

And to those of you who cry ‘fowl’ at the ostrich who walks away when laying her eggs…that’s right, the Creator deprived her of wisdom. Now consider the robin who in fact sits with her egg, then keeps the little one, then feeds her, not by snaring a worm in the web, nope, but another kind of work, searching the ground. In all labor there is profit.

People cry for ‘proof’ of the Creator, and truth be told, they do not want proof. The proof is called life. Period.  Insects, animals, fish, birds, the conscience, nature, scripture, blood, birth, death, water, oil, fruit, flowers, and of course humanity, take your pick, the hand of God is everywhere.  Don’t believe it?

If life is not enough proof…..tis a pity, for the www is a killer for unbelief.

33 Responses to The word wide web