(This is a reprint of a perennial favorite)

Here a leaf, there a leaf, the weaker of the leaves give in to the first chill of fall, and boast of their first rights to claim a spot on the ground. They fall in silent agreement that they will meet another kind of use. 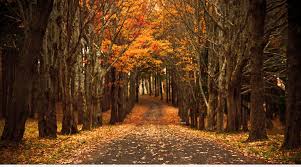 They will claim their very own space over a twig, an acorn, or some may dare to fall into a stream, and end up, God knows where. Ah, how I am jealous of a leaf who lives with such faith, not knowing what tomorrow may bring.

But the leaves elder brethren cling steadfast to the branches above, for they know the first cold snap is but a tease, and the young ones fell prey to the bait, while they remain, resolute of mind. The colours! They want to see their very change.

They began as a young bud, weathering the early attacks of storm and frost, standing tall against the winds that would destroy them, but stand they must. The pressure of temperature change and the audacity of thunder dared them to stay, and they not only resisted, but grew into beautiful leaves.

They provide shelter to so many friends, for the insects that live having never seen a human, are welcome to enjoy their company. The birds of the air also take cover and smile at such understated beauty. Their chirp is an occasional clap for the music made by the rustle of the leaves. Leaves and birds are very good friends.

As the air increases its plummet, the older leaves give a hint that it is time for them to go, and with little resistance they make their fall. The elder statesmen of the mighty oaks must have their time alone; there is a grand competition as to who is crowned king as the last leaf to succumb.

It is now storm season, and the intensity seems to be unending. The leaves fall not one at a time, but in bundles, they are fearful, and race to the earth, but the grandparents remain. They know at least two more times, they will have a chance to change colour, and communicate with each other, as the few remaining leaves yet to fall.

They live for this time alone: The communication between themselves as to what they have seen and heard this past season. They are the grand wizards and the owls of leafdom. By virtue of their strength, endurance, and vision, they have claimed the title as the last hero to fall to earth, so they agree there will be no longer competition, but first they give a quick wink, and they fall together, singing and quietly partaking of the final dance of life before they bed down.

The squirrels applaud them for the cover, the deer bow the head for the crisp sounds it affords them against oncoming prey, and the turkeys make their trails lest they be found out. In the magnificent seasons of life, the lowly leaf has gained the utmost respect from all of nature, only to be changed yet again, into another existence, even compost.

So too are we like the leaves; young sprouts, tender shoots, teens, adults,  then finally we fall to another life. The glory of life is fleeting, and like that leaf we all fade. Our memories and impressions remain, hopefully with others, knowing full well we will see them again, similar to the seed which morphs into a flower, another kind of life.

God promises His people new life, but there must be a planting into the ground first; this is His way. We may look forward to autumn, but we can not live to see the wonderful change that HE promises.

Time is short, make a new friend, lend a hand, latch onto the autumn of life, prepare to bed in the earth, and be a closer friend of leaves and  God.

Blending the colorful issues of life with the unapologetic truth of scripture, while adding some gracious ferocity.
View all posts by ColorStorm →
This entry was posted in Nature and tagged autumn and the seasons of life, Nature and nature's God. Bookmark the permalink.

5 Responses to The autumnal wink