Ooh call the cops, I just triggered some people and offended others; woe is me for being so insensitive and oh so politically ignorant. 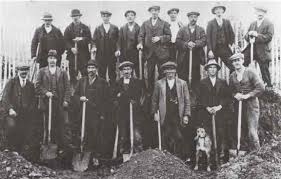 While on a recent trip, I enjoyed seeing the quintessential road signs: ‘men working,’ while seeing men  operate massive Beckwith earthmovers, Kubota bobcats, Old Milwaukee sawzalls, Makita drills, Ford tractors, cement loaders,  while laying steel girders, tower climbing, sand blasting, pit digging, break taking, men. That’s right, men working, but wait, I may have misspoke, as the ‘men working signs’ were m.i.a. Yep, they were missing; we wouldn’t want to offend that one person who may have been of another gender.

Jobs typically done by men, sought for by men, and excelled at by men  have been at threat for some time now, to assuage the weak-minded crowds of pc gone haywire.

If you are a woman, and you see a ‘men working’ sign, does this offend you? Are you that shallow to ignore the fact that for eons, this kind of work has been, is done, and will be done primarily by men? So what if there is a ‘men working’ sign. Who are you to rewrite reality so your ‘feelings’ are not disturbed?

Get a grip, grow up, gird up, (man talk) and for once, consider the possibility that ‘men working’ speaks to the essential difference between the sexes, and there is no apology for admitting to the obvious. (male and female created He them)

During that long trip, I saw men everywhere, do you hear me? I said there were men everywhere, working that which is a man’s job. Could a woman do the work? No doubt, and only a fool would argue, but rest assured, SHE could care less what the sign reads, the fact is, she is operating in the mans field.

Indeed, they must be included in a field in which they are naturally uncomfortable, they must have the sign removed! Can’t have a sign that reads ‘men working.’  When was the last time you saw a woman drive a cement truck? Or when do you recall seeing a woman (by herself) load refrigerators on the Friday curbside pick-up? Didn’t think so.

So here’s a toast to men, and a toast to the women who have no issue with ‘men working.’ Hip hip hooray for those ‘men working’ signs, if you ever see one. And to pc: go away and learn the difference between allen wrenches and Allen Ginsburg.

Blending the colorful issues of life with the unapologetic truth of scripture, while adding some gracious ferocity.
View all posts by ColorStorm →
This entry was posted in Homespun and tagged pc and men working, society and pc gone mad. Bookmark the permalink.