Yet there is more!

Yet one more confirming word of the reliability of scripture amidst a world of scientific ignorance.  See the kids below? The ocean was there.  Dry land now, hmmm. 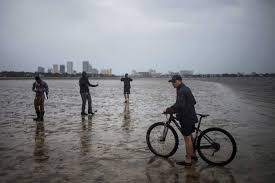 Read the account in the scriptural narrative, and perhaps you will get a fresh appreciation for God and His always relevant and perfect word. Enjoy the account of Moses as if it happened yesterday.

Look at the link and vid. The ocean was ahem cough cough, once teeming with water, until………a strong wind blew.  A hurricane is a pretty strong wind.    😉

So the Egyptians were harassing the Israelites, and you know the account. Question is, do you believe it?

And Moses stretched out his hand over the sea; and the Lord caused the sea to go back by a strong east wind all that night, and made the sea dry land, and the waters were divided.

And the children of Israel went into the midst of the sea upon the dry ground: and the waters were a wall unto them on their right hand, and on their left.

And the Egyptians pursued, and went in after them to the midst of the sea, even all Pharaoh’s horses, his chariots, and his horsemen.

And took off their chariot wheels, that they drave them heavily: so that the Egyptians said, Let us flee from the face of Israel; for the Lord fighteth for them against the Egyptians.

And the Lord said unto Moses, Stretch out thine hand over the sea, that the waters may come again upon the Egyptians, upon their chariots, and upon their horsemen.

And Moses stretched forth his hand over the sea, and the sea returned to his strength when the morning appeared; and the Egyptians fled against it; and the Lord overthrew the Egyptians in the midst of the sea.

And the waters returned, and covered the chariots, and the horsemen, and all the host of Pharaoh that came into the sea after them; there remained not so much as one of them.

But the children of Israel walked upon dry land in the midst of the sea; and the waters were a wall unto them on their right hand, and on their left.

Soooo Mr/Mrs sceptic, thousands of years ago records what is said today to be impossible, only to be shown as a matter of fact.  Gotta love that dry ground of the ocean by a strong wind, only to return to the waters of full strength. The God of Moses is the God of this blogger, as well as the only God of heaven and earth.

God’s word has never lost an argument to ants, those industrious little fellas.

Blending the colorful issues of life with the unapologetic truth of scripture, while adding some gracious ferocity.
View all posts by ColorStorm →
This entry was posted in Earthquakes and such and tagged God's word and hurricanes, Moses and the dry ground, Tampa Bay's dry ground!. Bookmark the permalink.

10 Responses to Yet there is more!