A purveyor of prurience said this recently and all the godless said amen: ‘there is more wisdom in Aesop’s fables than the entire bible.’  Hmmm. Make that a triple hmmm bartender, on the rocks. 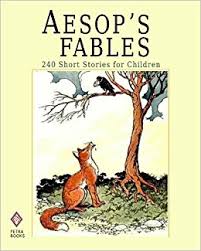 This of course comes from the pits of a heart which lacks underzandeing in all things true and spiritual; this comes from a mind bankrupt of what exactly scripture is; and this comes from a dark soul which at every opportunity seeks to bite and devour God’s word.

Ha, good luck with that! Key word there ‘seeks,’ for a man doesn’t have enough teeth to put a dent in scripture………as it is written.

Sure you always have the numbskullery of commentary which casts God’s word aside as useless, but then again, this coming from people who say Abraham, Isaac, and Jacob were figments of pure poetry, and that the wisdom of Solomon was no better than Degrasse or the so-called science guy.

But where does one start when foolish statements pit God’s word against fables? At the beginning of course, where before a man can protest, God’s word shuts all mouths before Him in silent majesty. That’s right, believe it or not, like it or not, all men underzande that ‘in the beginning, God created the heaven and the earth,’ and that God’s work was ‘very good.’

It’s not a topic up for debate, it is not a matter of opinion, it is purely a matter of fact, for the Creator put within His creation the ability to know this. To date, no atheist has answered which came first the human brain or the human skull, no, they cannot answer, as God’s word shuts the mouth as I have reminded many times.

Any fool can write a fable, so what, but no fool could possibly conceive the word of the living God. God’s word comes to us without compromise, without apology, and tells us things we innately know; tells us things we cannot know, such is the divine thumbprint.

The account is factual, the information is historical, the truth is verifiable, it is all good, speaking to the heart, mind, and soul in ways that would make the greatest fablist jealous.

God said ‘let there be light, and there was light.’ Aesop said that?

God created whales after their kind. Aesop did that?

God created great lights including the heat from the sun, and the cool from the moon. Aesop did that?

The Lord made Orion like a string of pearls dotting the heavens. Aesop was thus skilled in macrame?

Solomon said ‘cut the baby in half.’ Aesop proved who the mother was?

The wisdom of David slew the big oaf Goliath.  Aesop drew from such a well to fell a big clown?

The Lord Jesus was mute before Pontius Pilate. Aesop washed his hands before such a man?

God and His word shuts every mouth on earth before Him.  Aesop was quite the dentist?

‘There is not a just man upon the earth who doeth good and sinneth not.’  Soooo, Aesop was God?

Scripture records the origin, history, and destiny of man. Uh, remind me, are we children of Aesop, or children of Adam?

Wasn’t it Aesop who said that Gentiles were grafted in to the olive tree………….

Didn’t Aesop say of the regathering of Israel?

Wasn’t it Aesop who said not to offend one of the little ones who utterly believed in him………..

Wasn’t it Aesop who laid down his life for his friends………….

As clever as Aesop may have been, he would have been the most prized fool to say of himself, that he outranked Solomon in wisdom.  Then again, there is One greater than Solomon.

I could do this all day, cite the embarrassing ignorance and foolish commentary of those who say Aesop has the drop on scripture.

Not underzanding, but more correctly underhanded, both cut from the same cloth.

Blending the colorful issues of life with the unapologetic truth of scripture, while adding some gracious ferocity.
View all posts by ColorStorm →
This entry was posted in Unbelief (ahem: atheism) and tagged aesop, aesop and scripture, and God's word, colorStorm and God's word, truth. Bookmark the permalink.