A guy walks into a bar…. 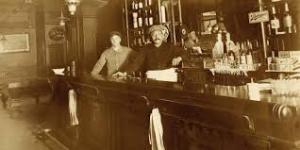 Sitting down, he strikes up a conversation with a cosmopolitan looking stranger who patiently listens to his gripes. ‘Yeah, I used to be a Christian, but all these idiots are responsible for my current state of deconversion. Yep, can’t stand it. They can’t answer any of my questions. They have no proof.  They believe things that a man of learning would laugh at. Their doctrines are inconsistent and contradictory, and I can’t trust any of them. Besides, science is not compatible with the bible,’ as he slams his shot glass on the bartop.

The elder bearded man looks at the bartender with a raised eyebrow and says: ‘Seems this fella is a bit unhappy,’ then turns to his new friend and asks: ‘Do you have an example or two of how these people robbed you of your faith?’

‘Ha! There’s not enough time in the day, but here ya go. They think that God created the sun, moon, stars, oceans, trees, whales, monkeys, man, woman, gold, coal, and we know this is impossible, for university professors say evolution created all these things.’

‘Hmmm. Some smart people there eh, those PhD’s. Apparently they were present at day one and know that whales and monkeys were purchased at K-mart with counterfeit currency, and not made perfectly by a wise Creator with the ability to reproduce the same. But what does creation have to do with Christianity?’

‘You are changing the subject. Christians believe this stuff, and science says it is not possible. Besides, Calvin contradicted Luther who contradicted Paul who contradicted Augustine, and we all know that faith without works is dead, but James contradicted this, and also, there was no flood, King Solomon never lived, Cain never killed his brother, and there was no way on earth Methuselah lived to be 969, Moses at 120, a virgin never conceived, Pilate never met Christ, Gamaliel never taught Saul, Stephen was not stoned to death, and all Paul’s writings were forged lies, and Degrasse, Nye, Hawkins, and so many more have proved the bible is a myth.’

‘Whoa cowboy, come up for some air. Bartender, give this man’s horse some water…..’

You see unhappy once believer, your new connery has nothing to do with believers, but has everything to do with YOU, personally. You have been duped into looking into the very thing scripture commands you to look away from… your vain imaginations and self made intellect, while you now blame God and scripture for the darkness you see in everything.

You have traded logic, history, and common sense, and you have found fault in the monarch of books which speaks the truth of the trinity of the level, the plumb line, and the compass, tools which prove to any sound Judge that the case has been made, is made, and will always be made that there is One above all who has revealed Himself to the conscience. There are many reasons He is called Faithful and TRUE.

Your complaints are borrowed, stale, and you ask ten thousand irrelevant questions while avoiding ten million answers already given. No, Christians are not the reason you have been deconned, but your own crooked heart has forged its own path. God’s word is blameless, and if a thousand believers today said that God is dead, this would merely prove them liars while God laughs. His word is that good. And YOU would still be responsible for WHY you now need the liquor of stupidity in place of the pure water of the springs of life, with the source of course being God Himself. But by the way, Christians know God is not dead, but alive and well. Only spiritual dunces find fault with God.

So yeah, all the godless scientists and ‘former’ believers are drunk.

Blending the colorful issues of life with the unapologetic truth of scripture, while adding some gracious ferocity.
View all posts by ColorStorm →
This entry was posted in Unbelief (ahem: atheism) and tagged are atheists mentally drunk?, former believers?, science faith and decons. Bookmark the permalink.

10 Responses to I’ll have another