As was mentioned elsewhere, to Doug actually, that a few thoughts would be forthcoming regarding a common theme and scripture, that being, that there are far too many interpretations and ideas that suggest the entire text incredible, for after all, everybody has an opinion, and that many opinions supposedly testify to weakness or the alleged shortcomings of the monarch of books. 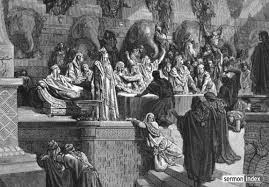 However, the holy scriptures are not a book of opinions, theories, assumptions, or suppositions. It is a compilation, a determined set, a book of acts, facts, good and bad deeds by good and bad kings, God’s promises, His covenantal promises with Israel, a book of verifiable geography, history, literature, poetry, political stunts, wisdom, entirely accurate prophecy, science, doctrine, but above all, truth in all things, and truth within the grasp of all who read and understand.  It is only our opinions of those facts that cause mischief.

But ah you say, your understanding is better than mine, and her interpretation is not as good as his. So is it now God’s fault that we are sloppy thinkers and readers? Do we now dismiss the whole because some have tampered with parts? Perish the thought, perhaps we have not been careful enough in our conclusions in the areas in which we disagree.

I am of the opinion that scripture is 95 per cent understandable, and the 5 is also there for the taking, but far too many write scripture off entirely because THEY do not understand the writing on the wall regarding the 05. For goodness sake, the apostles were clueless at times standing in the presence of the Lord, but they understood LATER, and therein is a valuable clue in gleaning the gems from the incomparable book. Any understanding of value is truly worth the search, and even more so waiting for. There are seven days of the week, and Tuesday does not have bragging rights.

God does not force His way, like a fisherman He draws, quietly, not upsetting the waters so to speak, till our minds are settled and we can receive, but not all are at the same spot on the boat or the pier. People make artificial enemies because they do not agree as to the shape of the earth or justification by faith; good examples, but scripture is far more worthier of engaging, and Martin Luther, John Calvin, or the moderns such as McArthur, Hagee, Osteen, would weep at the feet of Paul the apostle for how much they got wrong.  Still, it’s better to be on the train.

When we read of the cherubim in Genesis for the first time, we must honestly admit ‘what are they?’ and that is fine. But scripture is its own guide, we learn a little more here, a little more there, in Exodus, Ezekiel, in Hebrews, and ending in the Revelation, all revealing more and more of the purpose and nature of God Almighty, as He slowly draws the earnest reader who has a soft heart. God is never in a rush nor late. Sobriety of mind is essential to correct conclusions, but far too many stop at the inns of unreliable emotions, and rest areas of godless science, useless theories, and baseless assumptions, drinking unprovable ‘facts’ which result in drunken conclusions.

Need proof? Sure. Whales walked on earth like dogs. A drunken conclusion. God is not a God of love because a gunman kills. Unreliable emotion.

But is this related to ‘interpreting scripture?’ Yes indeed, and far too many Christians are affected by the infectious waste of guesswork because they think it is spiritual to straddle the fence to appear intellectual, to appear ‘up to date’ with wireless technology as it were, instead of actually walking and talking to a human being in person. Whales are whales and will always be whales. God is good and will always be good. We live in a sinful world, and this explains the 95 per cent.

This is why there are so many unfounded ‘interpretations,’ they which are concluded without all the necessary parts. God’s truth is easy on the ears, and sadly, we do disservice when our context is missing a few doughnuts from the dozen.

If someone lectured you in the Croatian language, and you only knew Spanish, you obviously would need an interpreter, but still you may have no understanding in the subject matter, so while one may hear what is said, he still may be tone-deaf as to what it means.

Some disciples heard thunder. They did not hear thunder. They THOUGHT they heard thunder. Imagine now the hearsay of they who heard the apostles say THEY heard it thundered, and now you have one big gossip fest. Years and years of unreliable GOSSIP could have turned into a bonfire, then a forest fire, and you could easily see the carnage.

But ultimately, lazy thinking leads to lousy interpretations, and far too many believers are content with crumbs when they can have a slice. Denominations are proof of this fact, with some majoring in minors. That said, lazy thinking in the scriptures is far better than ‘correct’ thinking about atheism.  Still, the better way is to grow from babehood to maturity, setting aside elementary principles, not that they have no merit, but that God’s word is far more instructional, richer, deeper, valuable, and of course a thousand times more satisfying.

I do believe that God honors honest requests, and hears the cries from our hungry hearts. We know when we read something if it is a clear voice of truth, a clanging cymbal, or just plain thunder. We know when we have not only the interpretation, but the understanding. The entrance of thy word giveth light.

In the end, there are no defects with God or scripture. But arguments? Ha, that’s the nature of the beast. Some are better than others. This is biblical, and I’m guessing fair-minded people will agree with this post.

Blending the colorful issues of life with the unapologetic truth of scripture, while adding some gracious ferocity.
View all posts by ColorStorm →
This entry was posted in The word of God and tagged Gods word is gold, interpretations and understanding of scripture, isms schisms and truth, the word of God, why is scripture difficult to understand?. Bookmark the permalink.

5 Responses to Interpret this