I am Jack the barbarian…….grrrr

Was reminded recently that stone age intellect was not limited to our ancestors, those illustrious goons who unlike us moderns, did not waste their time twiddling their thumbs on a device, but were busy making brass, copper, laying magnificent stonework, and showing their unequalled carpentry skills, ‘unto the coping,’ yet magically, as if overnight, we have finally arrived, even to the point of saying the craftsmen of past were doing life all wrong. 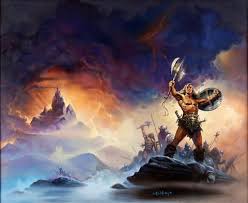 Their calculations were incorrect, their math was wrong, water acted differently five thousand years ago than it does today, and the likes of Job, Joseph, Solomon, Priscilla, Lydia, Mordecai, Esther, Paul, Apollos, Stephen, Abraham, Noah, Seth, and Mr. Adam were stone age dunces, AS IF THEY EVEN LIVED AT ALL.

Yep, today, we have Neil DeGrasse and his sidekick Nye to tell us that all these men were clueless as to life and intellect, and that man has not evolved at all as far as intellect, UNTIL he jumps onboard the gravy train of modern science, and comes to understand that Easy Street is found in the halls of godlessness, and in the labs where godless men have dissected God out of His own creation, and in the classrooms of self-made professors who decide, by artificial fiat, what is, and what is not true science. Yuck and double ughs.

It is one thing however to be labelled a fool by evolutionists and atheists, it is quite remarkable however to be dubbed ‘barbarian’ by people who should know otherwise. Why pray tell are some believers on the receiving end of such a wonderful ascription? Ha, I’ll tell ya. When you don’t ‘do’ science quite right, or should I say, according to the standard fare, presto, you are put in the corner, never to be heard from again.

After changing url’s and losing many a follower, the list further narrows any time you put forth ideas that are considered jack-out-of-the-box, and therefore, a pariah. This is so common in life, but more evident on blogs, because we can hide so to speak behind a keyboard, and keep our cards to ourselves.

When I hear that we as members of the human race are SUPPOSED to take as gospel, the WORDS of godless scientists who PROVE we are on an endless carnival ride called earth oscillating and propelling at a mere 67,000 mph, is it any wonder my left eyebrow raises, and asks: where is the proof? Is this asking too much? I think not, yet believers put other believers in concentration camps of isolation and call them unworthy of friendship. Too bad, and speaks to the innate ignorance of both atheist and believer who have formed an unlikely confederacy.

Me? Nothing in common with the religion of atheism, and ever better yet, nothing in common with their science, so this presents a dilemma for far too many believers. To agree with the atheist as to his science, is to sup with the idea that the atheist has ‘facts’ to support such notions, (Hello science falsely so-called?) but to disagree with the believer who sees otherwise, is to say God is not clear enough, so we will default to the science of the atheist. Both are terrible conclusions, and are weak excuses for arriving at a premise.

Prove the 67,ooo mph, and rest assured, not one person has done so. Call me a fool for saying so, but I have my senses, logic, facts, and scripture on my side. If I am wrong show me. If I am a liar, tell me, but please do not do so with opinion or feelings. There is no topic on earth that can not be explained accurately, that is, if we are brutally honest with ourselves. To be labelled a moron by an atheist is expected, but by a believer……………….?

To those of you who have put your neck out for my sake, and have seen the bigger picture that believers are not Stepford twins, that we all see things differently, that we can find value where others see none, thank you. I have neither shunned from the gospel, and have told the truth, truth which makes some squirm.

But I remind you dear friend, that Christ Himself was thought to be a worm, and not a man, with unjust accusations heaped upon him that we cannot fathom, yet in all this, He understood, because He knew what was in man. All it took was knowing one man Adam, and in this He sympathized.

If the Highest of all has gone lower still, what does this say of our self-made exalted positions where we cite each other as barbarians, morons, evil, stupid, or stone age believers?  Nuff said.

Blending the colorful issues of life with the unapologetic truth of scripture, while adding some gracious ferocity.
View all posts by ColorStorm →
This entry was posted in God and science and tagged God and science, godlessness and false science, the science of atheism. Bookmark the permalink.

43 Responses to I am Jack the barbarian…….grrrr