In my never ending quest of easily exposing the fraudulent false science of evolution and godlessness, and proving every word of God is good, today we have this. 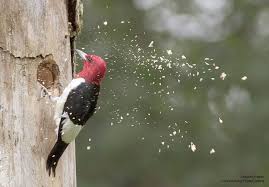 One would think, that after bazillions of years of head banging, the woodpecker would so tire of having to drill like a jackhammer his beak against the tree…..and evolve already, to the point that he would not be the only bird which suffers from daily migraines….just to eat his lunch.

Or…. we could consider there was NO evolution as far as the woodpecker was concerned, there were NO bazillions of years, there were NO gripes by the bird, and the knockety knock daily raps were simply music to his ears, with only people complaining that the bird must be an idiot for not evolving already.

Thus does creation daily pronounce evolution as mindless duncery, and thus does nature sing the praises of God.

Blending the colorful issues of life with the unapologetic truth of scripture, while adding some gracious ferocity.
View all posts by ColorStorm →
This entry was posted in Nature and tagged birds nature and scripture, evolution and woodpeckers: nope, woodpeckers and scripture. Bookmark the permalink.

7 Responses to That’s no angry bird!!