Hello to those of you across the globe, and a special salute to those of  you in Croatia. 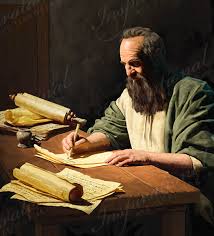 Paul was placed in a most impressive scenario as he wrote to the Roman believers, for he  would be led by the spirit of God as one who was a prosecuting attorney, and prove that the whole world is undone, that all have gone astray, but then by the same spirit he would now write in defense of the accused.

A masterful work this book of Romans, as the skeptic is silenced, the fool is exposed, the religious man is uncovered, and the heathen too is become mute. Before he enters upon that work, he bestows grace and peace upon those at Rome.  Grace could only come from heaven downward, and an appreciation of the peace of God can only be had by those who have been brought to God.

But he wishes his readers grace and  peace from God our father, and the Lord Jesus Christ. There is one source where the water of life flows,  and we learn elsewhere that the first and the last, the Alpha and the Omega, was in fact he who was once dead, and now liveth forevermore, and his own live through him.

But this grace and peace does not come by Christ, or by Jesus alone, this is true of course, but the spirit of God is teaching something much better. He is the Lord Jesus Christ, a name not comfortable with the unregenerate. This grace and peace is given freely to the saints of God, these divine qualities characterize God’s own.

God’s spirit seals who he will, and where you see grace and peace, you see his stamp. The grace of God is kind to the sinner, as well as the saint. God causes the rain to fall on the just as well as the unjust, thus, souls who are indwelt by God’s spirit, act, think, and are easily identified by their fruits. Paul was brought to God by grace through faith and he had no desire to stone a sinner to death, for he did that when he was Saul of Tarsus, obviously the behavior of an unsaved man.

Grace, that divine inscription upon the heart of a christian, a heart that prays for its enemies, a heart that seeks blessing upon they who curse; a heart that understands that today is the time to manifest the patience, mercy, and long suffering of an all holy and compassionate God.

A heart that remembers too what it is, and what is in man, therefore could not possibly ask God to send down fire from heaven. Grace, that benevolent giving of favour toward any object who is most undeserving, no matter how profane, or how wicked.

‘Forgive them, ‘ said Stephen the Israelite, as his life was brought to a close by a group of lawkeepers. So Paul reminds his readers at Rome, that it is the grace of God, and the peace of God, that he wished upon them. Paul heard a good report that these brethren had a faith that was real, and he was quick to bestow a commendation.

They had a genuine faith, a faith that proved itself in the market of the world. These Romans were not living a monastic life, but they were in fact going into the world with the gospel.

Yes, there is much they did not understand, but the recognition of Paul towards them went a long way, as to how this letter would be received. Faith without works is dead says James.

Therefore this faith was real, it was Godward, and even the simple rendering of a glass of water in the name of the Lord will not be forgotten. God knows and sees all, he also sees the repulsive deeds done by they who say they have faith.

A person claiming divine forgiveness, while bending over to pick up stones to end the life of a sinner, is surely a repulsive deed done by he who lays claim to the grace of God. Paul would expose this as another gospel, one in which he had no command to preach or teach.

But Paul thanked God for the Romans, for it is the word of God alone which is able to convert a soul and to build one up.

Quite striking is it not that the esteemed brother of the faith, Paul the apostle, claimed to be debtor, both to the Greeks, and to the Barbarians. Surely this would come back as a point to remember, when Paul would write to the Romans: that a man is indebted to God to love his fellow man, both christian, and all others. (It is a pathetic example of the religion of fools that suggests sinners be put to death, for no other reason than that they are sinners. hint: beheadings)

He prayed that they would stand complete, and like that beloved man Ephaphras, his life was wrapped up in the welfare of others.What about you reader? A mans prayers reveal whether he spends time in the presence of God, or if he only enjoys the company of himself.

Show me a man who speaks to God for man, and I’ll show you a man of unusual power, grace, who asks God’s blessing and mercy toward all.

Speaking of the enemies of the gospel Paul would prayer: ‘my hearts desire and prayer to God for Israel is that they might be saved.’ A spiritual man  understands what the mind of the Lord is. A mind in tune with the spirit of God carries his thoughts, and while yes, Israel presently rejects the Lord, the same word tells us that they are still beloved for the fathers.

It is impossible to curse those who are beloved by God. A little spiritual common sense goes a long way. So Paul breaks forth and utters that time honored word, that he was not ashamed of the gospel of Christ, for it is the power of God unto salvation to every one that believeth, to the Jew first, and also to the Greek. For therein is the righteousness of God revealed from faith to faith, as it is written, the just shall live by faith.

Ashamed ? Not Paul. He went into the synagogue first. But why? Because he carried a treasure in an earthen vessel, and the Jews were given the law, the adoption, the glory, the covenants, and the promises. Of all people who should have welcomed the gospel, it should have been the Jews.

But the truthful yet sad record is that many rejected Pauls words, thus rejecting God himself. Stephen offered pardon to Israel, and they could hear nothing of a Messiah being crucified. Pauls word in the synagogue was also thought to be revolting, for God is not a man, saith the Jews.

The book of Acts is a chronicle of two things really, the chronicle of Israels final rejection of the grace of God, and the going forth of the gospel to the Gentiles. And Paul was the divine instrument that proved both these truths.

The rejection of the Messiah was one more act of unbelief, and the stoning of Stephen was out and out hatred. Paul was stoned many times, and of course by the Israelites, the Jews, the Hebrews. Thus the grace of God to sinners would much more abound said he.

To the Jew first, but also to the Greek. Surely the Gentiles, who are here referred to as Greeks, would welcome the word of God through Paul. But unbelief shows no favoritism, and many Gentiles would want no part of this mans vain babblings.

The prejudiced hearts of the Jews perhaps reared its ugly head, for how could a holy God invite Turks, Scots, or Germans to the great feast, when the children of the kingdom had the choice seats?

Truth is always impartial, and many hearts are revealed as frauds of the highest kind, for there is no difference between Jew or Greek, ALL are sinners and undone. It behooves us not to make a difference, lest we disagree with God.