Hello to those of you in the Canadian Rockies. 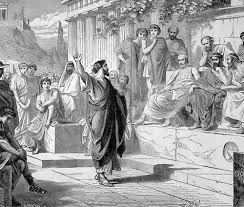 Remember Paul is laying out his case, which is entirely God’s message, but before there can be the glorious revelation of what justification means, he must stretch out his argument. Paul is developing that scriptural truth that there are none who are worthy of God’s favour.

And, to present the truth that all glory belongs to God, he must first expose the fact that man is also nothing but a scoundrel. And this will he do. The existence of a God at all hardly needs comment, for it is the fool who says in his heart there is no God.

Mind you, it is not that a person disbelieves there is a true God, but that a man simply denies it. He says in his heart, there is no God. He suppresses the truth of a Creator.

But you will understand, the devil believes in God too, so what does that prove. The basic root of mans existence points to a creator, and Paul says that what is invisible clearly points to an  all wise creator.

Paul adds that man understands this, and that subtle seed of philosophy or higher learning became the wisdom of the world, but Paul says all men know in their hearts there is a solitary truth and he adds, man is without excuse.

But the belief of a creator is not belief in a redeemer, and man cannot be brought to God if he does not even admit there is a God, so the apostle is finding all men in a hopeless situation. Thus, the fruit of such a heart that does not allow God in the picture cannot be good.

Paul explains that even women partook of such lewdness, along with men who had desires toward one another, and theses people were great sinners, as they tried too rid their conscience of an all knowing God.

Paul then outlines further behaviour of souls who rejected the true God, and such is no different today really. You may have a desire to focus on Sodom, and consider those souls as dastardly, yet Paul proves it is the same heart of man which is deceitful and desperately wicked.

There is no difference between a murderer, and a child who is disobedient to his parents. It is the spirit of rebellion which is consistent with all these truths, and rebellion saith the Lord is as witchcraft.

The Pharisees, the Pharisees,  were exhibiting the spirit of rebellion when they wanted to stone the poor woman to death. Equally egregious, perhaps worse rather, are those who say they are christian, who testify to this same behaviour, then cloak it as christianity. This is not christianity, and Paul agrees.

Yes, some of you make think, well I am off the hook, for I do not do any of those things Paul mentioned. Well, Paul is not finished with you, for he did not even begin to speak of religious people.

And this same indictment that God pronounce on the heathen, the Jew, or the philosopher, he will enunciate clearly to you as well, with the simple view that every mouth would be stopped, and the whole world, that’s every person, will be found guilty before the bar of heaven.

There can be no claim to the forgiveness that God offers, unless there is a proof that a sinner has been found naked in the presence of God. Paul anticipates all objections, and answers perfectly with God’s wisdom.