Paul the apostle, as a Pharisee accustomed to the importance of detail in learning, would now be given a new purpose with his analytical mind, as he would prove through the scriptures that this one, who he formerly persecuted, was in fact the very One who the scriptures spoke of.

You may recall that the New Testament bursts forth stating the Lord Jesus was the son of Abraham and the son of David. 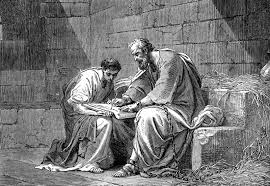 The genealogies in Matthew and Luke prove with unmistakable certainty, that the man Christ Jesus, is both son of man, and son of God. Paul states that the Lord is of the seed of David according to the flesh. He was a Jew, as he came to the land of the Jews, those who were called the circumcision.

Even the Lord Jesus said, ‘salvation is of the Jews.’  You may recall that it was a Jew, a master of Israel named Nicodemas, who came to the Lord by night.

Yes, religious people hate this fact, that the Saviour of the world is Jewish, but after all, it was they, and they alone, who were given the law, the covenants, the promises, and the services of God. So Paul directs his audience to this truth, that the Lord Jesus was of the seed of David.

Daniel the Jew wrote of the Lord Jesus, now Paul as a Jew writes with heavens blessing, that the fulness of time had come, and God sent forth his son, made of a woman,  so Christ came to the land of Israel to confirm the promises made unto the fathers

One of these promises was that the Messiah of Israel would occupy the throne of David in Jerusalem Israel, hence the importance of Paul stating that the Lord was of the seed of David.

Do you recall that the word spoken to Mary that her son would be great, and the Lord God would give unto him the throne of his father David? Do you think  that God was surprised when the  Jews said, ’away with him?’ The rightful heir of the throne of David was cast out of the vineyard, for the children of the kingdom said, ‘we have no king but Caesar.”

Thus the Lord would weep over the city of the great king, knowing that a few millennium would pass before Israel recognizes the time of visitation. Instead of the throne of David, the Lord was received on a cross, with a mere inscription above his head, as it mockingly read, ‘king of the Jews.’

The only crown the Lord wore was one of thorns, but in this mystery of the rejection of the Lord of glory, God would give to Paul an understanding of his divine purpose, and this theme Paul would take up in Romans.

Of course, Paul would explain, that the tabernacle of David would be rebuilt, but he would also add that to everything there is a time and a purpose under heaven. Paul’s heart would be crushed by the unbelief of his people, but God would gave him a new arena, now to the Gentiles!

What a commission this was to this man who was master law keeper, sent to a people who were not a people, those who were without God and without hope.

Paul would say that all nations were all part of heathendom, for he would learn and teach, that between Jew and Greek, before God, there is no difference.

This was a quantum leap for the apostle to grasp, but Paul had a much better handle on this truth, than did Peter. So we see the importance of those few words Paul adds, ‘son of David yes, but always according to the spirit of holiness.

Holiness defines the true people of God, and this can only occur by the spirit of God. The apostle articulates it is the resurrection of the Lord Jesus that gives definition to this truth, as he continues to unfold the glorious gospel of the Lord Jesus.

Paul was separated unto the gospel of God, as he learned that the true gospel was according to the scriptures, that Christ died for our sins, was buried, and rose again from the dead.

Thus, in this very book of Romans, Paul would teach the doctrine of forgiveness of sins, the struggle of a believer,  the overcoming of all things, in addition to the regathering of the nation of Israel once more into divine favour, are all possible because of the resurrection of the Lord Jesus from the dead.

God is not the God of the dead, but of the living. It is a settled fact in which there is no argument, that Christ was delivered for our offences, but blessed be the name of the Lord, he was raised again for our justification.

And it is Paul who was given the doctrinal aspect of the Lord’s very resurrection, this is why  there is such an attack on the ministry of Paul. Infidels may scorn, and professing christians laugh, but he who was once dead, arose, and has ascended, and is presently seated on the right hand of God, and this rejection says Paul does in no wise nullify God’s promises that the Lord would sit on the throne of David, after all, the scriptures must be fulfilled, and it is only the arm of the devil who tries to scorn this truth.

But Paul says to the Romans that he has received both grace and an apostleship, and as a servant, he would hold back nothing that was profitable unto them, for the glory of God.

Paul knew that the believers in Rome were deserving of his ministry, not because of any intrinsic worth, but because they were partakers of the same grace, and beloved of God. Called to be saints, that is living ones who represent the God of creation.

A saint is a redeemed sinner that’s all, and sainthood by a divine call. When Saul of Tarsus was brought to God, Paul the apostle was a saint of God, long before he preached a word to others, or long before he made a contribution for the poor.

It is true, that a saint of God is to be holy, and considerate toward all men, but the person of the Holy Spirit of God marks out the redeemed, and the christian life follows sainthood.

But the saints who the apostle Paul wrote the book of Romans to, were those individuals who believed, and it was they who the apostle was now challenging to a life of faithfulness. And this reasonable service was easy for a grateful heart to perform, for you see, the yoke of the Lord Jesus is not a burden.

Paul knew that these believers were as he, called of God, but called to be saints, and this truth meant a life of service unto the God of all glory. The apostle knew they were also beloved of God, and he would continue to unfold all that the spirit of God bade him.