In recent discussions  with self-described intellectuals who have no use for God in His own creation,  the thought occurred to me that people are choking on information overload.  We do not ‘chew the cud’ as it were.  We do not take in, consider, ruminate, then bring up the idea again for further consideration.

Granted, there is a natural tendency to protect a bias, but why are we so slow to change our minds when what is obvious stares us down?  A man accused the apostle Paul of madness because of Paul’s faith and learning, and he instantly wrote off Paul as a lunatic because of his own inability to chew the cud.

Back up in time. A family is on their perennial vacation.  They are are cruising through the Rockies on a cloudy day, when off in the distance, there it is, a sight to behold, up in the sky, a perfectly formed arc of dazzling color, a mammoth rainbow touching the earth on both sides. 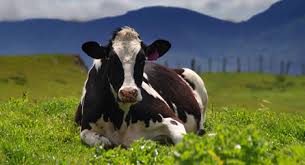 The three-year old girl stares in natural awe, and she cannot take her eyes off this wonderful sight that has engaged her entire being for the first time. She looks and looks, she tries to look away but she can’t.  She is etching in her memory that orb of color that to her is exquisite in every way.

Now the discussion ensues and she is told simply what the rainbow is, that it is a sign by God of His promise, it is His covenant, that he will never flood the entire earth with water. The girl takes it in, and with child like faith, has no reason to disbelieve. She was told the truth and she believed the truth.

She then said how great God must be, to be able to ‘paint’ such a thing, and yes, I agree with the youngster. But the young lass chewed the cud, she took it in, she considered the rainbow, and she is in awe of the Creator.

Yes many will take umbrage at her for being ‘just a child,’ and I say ‘that’s the point.’ People will try to spend a lifetime trying to ‘unlearn’ her of her magical thoughts, telling her she believes in a phantom, and that only science can explain the rainbow, and that if she believes in a God who created a rainbow, then she is not ‘moving forward.’

Well young lady, don’t trade your child-like faith for a thousand PHD’s (which some have their place obviously) and never give up your memory of the first rainbow.

Child like faith is not intellectually inferior which some imagine; it is simply recognizing the hand of God instinctually.

Fast forward.  The adults are driving through the Rockies. The family is intact, and in this SUV, God has never been welcome in the family, anywhere, anytime.  Off in the distance there it is, a rainbow, more glorious, if it is even possible, than ever. A dazzling display in the sky of perfect hue and perfection of shape. It is off the charts awesome.

And the reaction by the family? Not really is one. Why? Because it is familiar; they saw a hundred rainbows, and this one is no different. No awe in the heart, no chewing the cud, no thinking of a possibility that maybe, just maybe, God placed it there, perhaps just for them.

So the rainbow disappears, God’s promise goes by the wayside, another family chose not to see the hand of God, and the PHD will give his next lecture on the wonders of the human brain, apart from God of course.

Man has become immune to the miracle of life and the daily opportunities to see the work of a Creator, and chooses not to use their God-given eyes. Don’t worry young lady, you are not a lunatic for believing in the God of creation. And keep those wonderful child like-eyes open.

See that rainbow yonder? Take another look, and chew the cud.  (And oh, be careful that ye offend not one  of these little ones)

Blending the colorful issues of life with the unapologetic truth of scripture, while adding some gracious ferocity.
View all posts by ColorStorm →
This entry was posted in Exhortation and tagged child like faith, rainbow, Unbelief (ahem: atheism), wonder of creation. Bookmark the permalink.

6 Responses to Take another look